Empress Elisabeth of Austria (1854-1898) and Queen of Hungary (1867-1898) was surrounded by love and worship in Hungary during her lifetime, which increased after her tragic death. This interest and admiration towards her have not decreased over more than one hundred twenty years.

Most people who love Elisabeth got to know her from Ernst Marischka’s Sissi-trilogy of the 1950s starring the beautiful actress Romy Schneider. In Hungary, this popular cult trilogy is on one of the Hungarian TV channels every Christmas remembering, perhaps unwittingly, of Elisabeth’s birthday since the Bavarian Duchess was born on 24 December 1837.

It is very surprising for the Hungarians that in her homeland, Austria and all around Europe she did not use to be as popular and admired during her lifetime as in Hungary. She gained huge popularity several decades after her violent death on 10 September 1898. However, it was not only her assassination and the above-mentioned movies, which made Elisabeth become a myth and legend but also herself.

The Empress might not have been aware of the fact that it was also her, although unintentionally, who created a mysterious atmosphere around herself. She had already become a legend during her lifetime, partly thanks to her beauty. Many do not know that it was not later than March 1866, when she did not allow any photos taken of her. She was only 29 years old then. We must consider the fact that on her 30th birthday (on 24 December 1867), she was pregnant with Marie Valerie, who was born on 22 April 1868. When she was pregnant, no photos were taken. It was historian Patricia Zita Pálinkás, who researched that Elisabeth had the official coronation photo session (see the one above) in March 1866, around one year before the Hungarian coronation which took place on 8 June 1867. Along with the coronation photos, she had another photo series in which she is together with one of her greyhounds, Horseguard (see the photo beside the text). One may wonder why we see so many photographs that are dated later. The reason is very simple: photo montage and manipulation of photographs is not a modern invention! 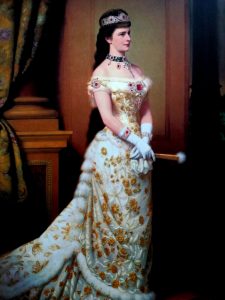 A few years after she had the last photos taken, she refused to have herself portrayed. The portrait left ((by Georg Raab, 1879) is an exception: in this, she is 41-42 years old. Besides, she had started refusing to attend as many public appearances as it was possible since the beginning of the 1860s – of course, then she still had a lot of official duties that she could not avoid. Furthermore, after the death of her only son, Crown Prince Rudolf, she rarely appeared in public, if so, she hid her face behind a fan or/and a veil which is why her old face was unknown not only for us but also for most of her contemporaries, which also added much to her myth. She carried her white umbrella everywhere, which she used to hide from the passers-by and those who wanted to take a photo of her. Some images were captured though, in which, however, Elisabeth’s face is covered (by a fan or umbrella) or only visible from the distance. She became an inaccessible, mysterious “Fairy Queen”, as she called herself in several of her poems, Titania after the protagonist of Shakespeare’s Midsummer Night’s Dream.

But what was the Empress actually like? We make an attempt to show the immensely interesting and complex personality of the real Elisabeth.
We have developed good working cooperation with the Hungarian Royal Palace of Gödöllő, Schloß Schönbrunn Kultur- und Betriebsges.m.b.H. and the Wien Museum, besides several other museums of the places relating to Elisabeth and the Imperial family.

“Authentic paintings have never been made of Mama. (…) And it will happen to everything that is said or written about her”, wrote Marie Valerie, Elisabeth’s daughter in her diary on 31 December 1898. The aim of the TEMPT – The Empress Memory Team is to keep the memory of Elisabeth alive and make an attempt to present her as trustworthy as possible in front of the Readers and Audience.

Thanks to one of my videos, the Hungarian branch of the Habsburg family got to know my work and contacted me. Through Count János Seremetyeff-Papp, who is close to the family, they received several of my articles and short films and decided to open their family archives, which had been closed to outsiders. In recognition of my work, Archduke Michael von Habsburg-Lothringen, great-great-grandson of Queen Elisabeth, wrote a recommendation for my book, emphasising that I present authentically the life of Queen Elisabeth and her role in the Hungarian history.

Barbara Káli-Rozmis, Researcher of the Empress and author of the book “Queen Elisabeth and the Hungarians”

Book: Queen Elisabeth and the Hungarian – Friendship or Love? by Barbara Káli-Rozmis